In this week’s article Kostis Roussos, Vaggelis Vragoteris and Haris Malamidis write about a new paradigm of working in common: the case of VIOME, a factory in the outskirts of Thessaloniki. They explain how “due to the general economic recession and the mall administration, the parent company went bankrupted in 2011, abandoning the plant of VIOME on its own faith. […] In 2013, together with a great movement in solidarity to the workers’ struggle, the workers of VIOME endeavored a big step: to take the production on their hands!”

What would you think if somebody had told you once that in the crisis-ridden Greece there is a factory being managed by its own workers, without bosses and hierarchies? Perhaps that this is a hoax; maybe that it started as an idea but was never applied. Οr even if something like this really exists, it would be temporary without any prospect of surviving until a new boss arrives to reopen the factory ‘normally’. Fortunately, none of these is true.

Let’s take it from the very beginning. VIOME S.A. was founded in 1982 as a subsidiary of Philkeram-Johnston S.A. in the outskirts of Thessaloniki, Northern Greece, producing chemical products for the manufacturing sector. Due to the general economic recession and the mall administration, the parent company went bankrupted in 2011, abandoning the plant of VIOME on its own faith. The only thing the former owners left behind was a massive debt, including of course workers’ unpaid salaries. Desperate and facing the danger of unemployment, VIOME workers, organized in their trade union since 2006, decided collectively to occupy their workplace and called for solidarity. The initial reason for the occupation, beyond its significance and symbolism as a means of struggle, was to make sure that both the production stock and heavy machinery would remain in the factory, hence preventing the owners from selling out everything. 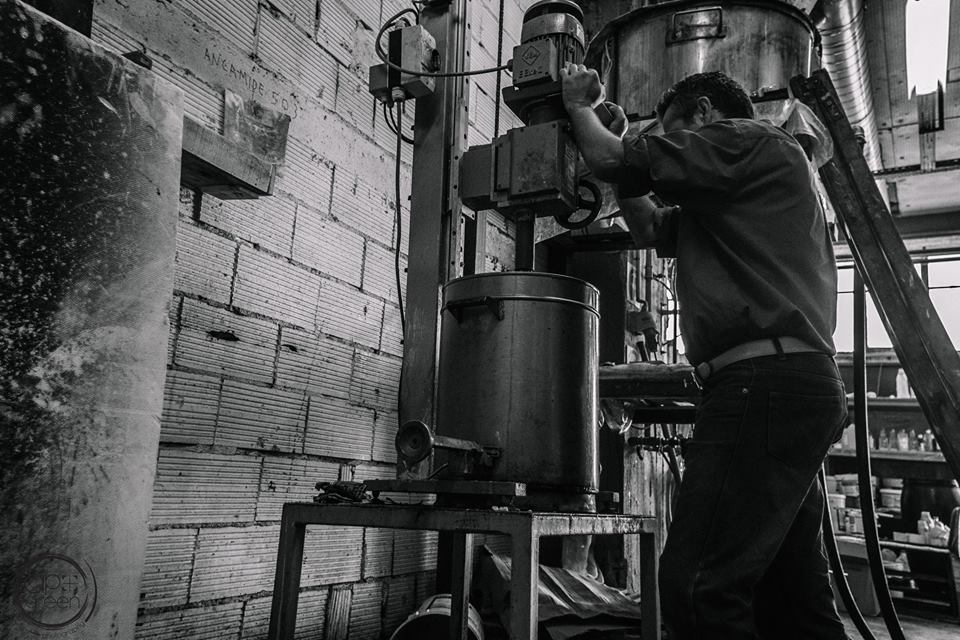 One and a half year later, in 2013, together with a great movement in solidarity to the workers’ struggle, the workers of VIOME endeavored a big step: to take the production on their hands! A cooperative was established, in order to acquire a legal form, and the ‘cogwheel of struggle’ began to spin. Since that moment, instead of producing super profits for the bosses through the exploitation of the workers, the factory became a source of dignity, equal labor relations and decent remuneration for the members of the cooperative. The second crucial decision that the workers took with the reopening of the factory dealt with the change of production: from constructive materials VIOME would from now on start producing natural detergents, eco detergents and oil soaps, friendly for the environment and human health. Despite its branch in Athens and its e-shop, VIOME’s products are distributed by a number of social centers, squats, cooperatives and small groceries across the country, while they are also exported in collectives abroad. 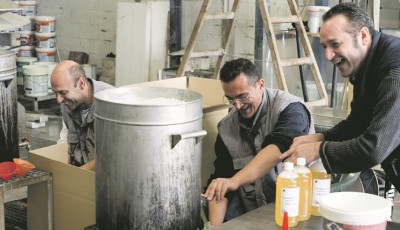 Working in VIOME is not the same as working in any other factory. We would not go too far by describing it as a process of commoning; that is a process which establishes a lived intimacy with the labour activity and production in VIOME, and also merges everyday life with a continuous political struggle. The events that led to the making of VIOME, as we know it today, can help us to understand the meaning of those conceptions. The occupation and recuperation of a factory in the city of Thessaloniki is the site of one of the longest and most important workers struggles in the country’s modern history. By occupying the factory, VIOME workers and the solidarity community have succeeded in blocking its closure and the loss of a handful of jobs in the middle of a monstrous austerity and unemployment crisis. At the same time they participated actively in the protest wave against austerity, supported other workers in their efforts to replicate VIOME’s example and developed strong solidarity bonds with a number of social struggles. Having developed relations with the movement of recuperated workplaces in Argentina, VIOME has adopted the slogan ‘Occupy, Resist, Produce’. A slogan which signifies the deeper political dimension of such a venture; this could be described as a movement not only against the dominant neoliberal state of things, but also as a pre-figurative practice that creates a real alternative in the here and now. The word ‘movement’ is particularly important here. It is used to describe an activity – Occupy, Resist, Produce – which at one and the same time emerges as a political struggle against neoliberal hegemony and creates a future to the present.

And what about the viability and sustainability of a self-managed venture like this? The number one danger deals with eviction and the auction of the plant, which have been canceled numerous times due to the protest actions of the workers and the people in solidarity. However, this danger is still there. Moreover, wrong decisions and internal difficulties were also present, since the path towards self-management was a terra incognita for all the workers. Nevertheless, VIOME workers have managed to survive all these five and a half years, defining themselves the way that they work and share both successes and mistakes. By keeping the factory ‘alive’, they have not fallen into the depression that derives from unemployment. The lived experiences and knowledge exchanges with other recuperated factories and social struggles played a crucial role in helping VIOME workers to invent an alternative paradigm of working in common. Since the first steps of the self-managed factory, the workers decided to follow a model of rotating roles in the production line and equal pay for all members. What is more, the emergence of this new way of working in common is based on equality, horizontality and direct participation of the members in the everyday life of the factory. Thus, all the decisions – ranging from issues around production processes and daily tasks to other broader questions and topics – are being made collectively, primarily in the weekly general assembly but also during the daily morning assemblies. 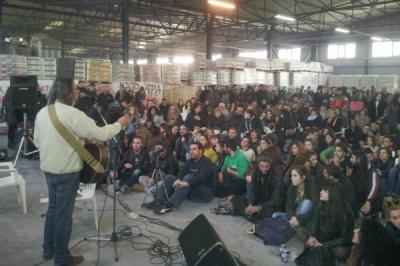 Based on these organizational and operational novelties, which constitutes what we named a new paradigm of working in common, VIOME has achieved to raise, slowly but steadily, workers’ income and recruit a number of new members (24 in total), contradicting in such a way the exhaustive salary-cuts and dismissals that take place in all the capitalistic enterprises. They have also contributed in the development of new products covering all the basic cleaning needs of households and professional facilities, while they steadily improve the products’ quality in contrast to the capitalistic tendency of degrading the quality on the altar of profit. Finally, against the neoliberal logic of gaining fast and temporary profit which goes together with the production of debt, VIOME sets forward a perspective of social contribution by creating new jobs for the unemployed and distributing its surpluses back to the society. And it is exactly this social interaction with the society and local community, an interaction that has everything to do with forms of solidarity, conviviality and direct cooperation, which marks one more crucial difference between VIOME’s recuperated factory and other places of capitalist production. As the local community helped the workers to take the factory back, VIOME workers decided to share their factory with all those parts of society that find themselves close to them. In this respect, a core element of VIOME’s social organization is the Solidarity Initiative, a weekly assembly in support to VIOME’s struggle composed by students, residents, other self-organized ventures and of course VIOME workers.

Through these plural activities of doing in common, VIOME workers and the solidarity community have succeeded in creating a factory always open for and accessible to every struggling part of the society. In this context, many important initiatives have been formed in the ‘factory without bosses’. To begin with, the ‘Workers’ Clinic in VIOME’  is a social solidarity clinic in which doctors, nurses and psychotherapists voluntarily offer holistic and integrative primary healthcare services to VIOME workers, their families, the members of other workers’ collectives but also to every other citizen lacking medical insurance or not. The Workers’ Clinic is the first parallel structure established inside VIOME factory, as part of the workers’ and solidarity community’s strategy to encourage the creation of more self-organized projects within the recuperated plant. Furthermore, in 2015, at the peak of the so called refugee crisis in Greece, a big part of the facilities was used as a collection center of first aid materials for the thousands of refugees that were incarcerated in the northern borders of Greece. In addition, since the re-opening of the factory by its workers, a plethora of actions took and continue to take place in a regular basis within VIOME’s occupied space: from bazaars without middlemen to concerts, theatrical performances, book presentations and even film shootings by self-organized productions. Following the respective meeting of recuperated factories and enterprises in Latin America, VIOME hosted the 2nd Euro/Mediterranean meeting of Workers’ Economy in October 2016. Currently, it aspires to co-organize together with a number domestic self-managed social cooperatives the 1st CoOpenAir Festival that will take place at the VIOME facilities from the 12 to 14 of October. 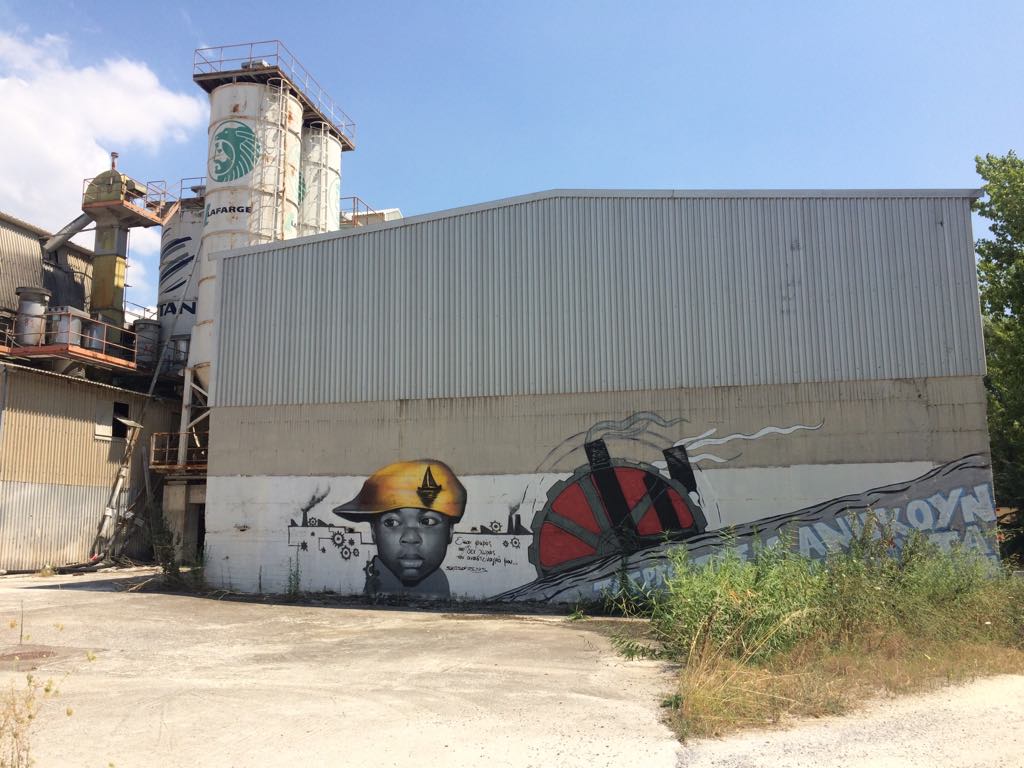 The social opening of peoples’ infrastructure, as it is the case with the social opening of VIOME’s recuperated factory, offers a horizon of possibilities from which to rethink and prefigure new and creative ways of organizing labour and everyday life. In other words, what once might have been a mere workplace comes now to include a variety of affective and social relations, new meanings, emotions and solidarities. Instead of utopian or imaginary communities, ventures like VIOME are sites of real everyday struggles, where people shape their daily life collectively on the basis of their shared needs and at the same time create new common wealth forged within relations of equality, care and mutual aid. We understand those sites of commoning as bearers of a new political strategy that is itself predicated on the complete transformation of the existing social order.

Kostis Roussos is a PhD student working on the commons and social movements at the University of Essex. He is a researcher at the Centre for Ideology and Discourse Analysis (cIDA) in the Department of Government. Vaggelis Vragoteris is a chemical engineer, SE VIOME worker. Haris Malamidis is a PhD candidate in Political Science and Sociology and member of the Center on Social Movement Studies at Scuola Normale Superiore, Italy. His research deals with social movements, contentious politics and solidarity economy.