Home International “March for Our Lives” : the post-9/11 generation rises against carrying the...

March for Our Lives is the first mass social movement under Donald Trump’s tenure as well as the biggest anti-firearms demonstration in the history of the United States. This rallying is already historic and successful in Florida, where legislation has been modified. Beyond the firearms question, 24th March looks like the birth of a whole new political generation. So argues Cyprien Caddeo, writing for our partners Le Vent Se Lève, and who is translated here:

The pictures which flooded the media on Saturday 24th March were impressive, as in Washington DC some 800,000 people took to the streets of the US capital city to demand a more severe control of firearm sales across the country. Similar mobilisations took place in many towns and cities across the US: 850 cities were concerned and 1 million and half demonstrators participated in all. The “March for Our Lives” movement already should be recorded in history books as the biggest anti-gun bearing mobilisation in American history. Only Donald Trump didn’t realise it yet: during the Marches, Trump was playing golf at his property in West Palm Beach, Florida.

As a symbol that sticks in the throat of many Americans, the “March for Our Lives” originated some 45 minutes from this golf course in Parkland. On the 14th February, 19 years old Nikolas Cruz entered his former high school and slaughtered fourteen pupils and three staff members with an AR-15 military-range assault rifle. This was, already, the thirtieth shooting since the 1st January 2018 on American soil and the eighteenth in schools…

With 495 casualties since the beginning of 2017, shootings are now almost conventional in the USA: mass shootings gain their frequency to the fact that the country contains 40% of the registered weapons in the world. Why then has the Parkland shooting given birth to a genuine mass movement that seems here to stay? The answer lies, no doubt, in the ability of Parkland survivors to come together quickly after the tragedy and to get things moving in the State of Florida.

On 7th March, the Congress of Florida voted a bill that limits access to firearms, against objections from the NRA,  the largest and most powerful pro-arms lobby. Since the Florida Chamber has a Republican majority (a particularly funded by arms industry camp), the tour de force should be welcomed. This is only a little step of course: if the minimum age to buy an arm rises from 18 to 21, if retractable stock weapons (such as the weapon used during Parkland shooting) are now forbidden and if delivery times are extended, and the law allows teachers and school staff to carry weapons…  The symbolic character and power of the protest is more significant: teenagers who are still not allowed to vote, manage, by acting in concert, to exercise more power than the lobbies.

Here is the real historical rupture: a new generation is entering the political field, which belongs to those 4 million Americans who will be able to vote by 2020. If this march was intergenerational and somehow bipartisan (although a strong Democrat majority), the youth of America was certainly over-represented and it leaded the demonstrations. This generation was born between 2000 and 2003, and it didn’t live through 9/11. The Twin Towers’ fall was the unsurpassable traumatic totem of previous generations and it is not in its imaginary psyche either. Last Saturday’s marchers have been much more impacted by wanderings and lies of Bush policies the Middle East or Patriot Act slides than by the left, right, and centre patriotism from their parents of older siblings. They were too young to vote in 2016, however a majority of them support Bernie Sanders; they are progressive and want change. Their electoral weight in 2020 may be decisive in most Swing States, and Florida in particular.

Already, hypermedia figures have emerged, faces that we expect to find regularly on the American political scene in the coming years. One such figure is as Emma Gonzalez. This 18 years old, shaved head, blue-jeans-with-holes wearing, openly bisexual and of Cuban descent young woman just became, without a doubt, the face of anti-Trump America. She is the one who brought silence across the demonstration for 6 minutes and 20 seconds (the precise amount of time Nikolas Cruz took to murder his 17 victims in Parkland). Some commentators already present her as the political future of Latino-American community in Florida

It remains to be seen now if the “March for Our Lives” will succeed in pushing the authorities to attack the irremovable right to carry weapons at the federal level, which would imply an amendment of the Constitution. One thing is certain, these young people are just at the beginning of their fight and are just beginning their political journey.

This article was originally published in our partner publication Le Vent Se Lève in March 2018. 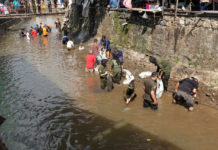 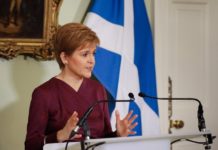 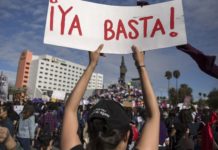 Ireland: ‘We have people without homes and homes without people. Mission not completed.’