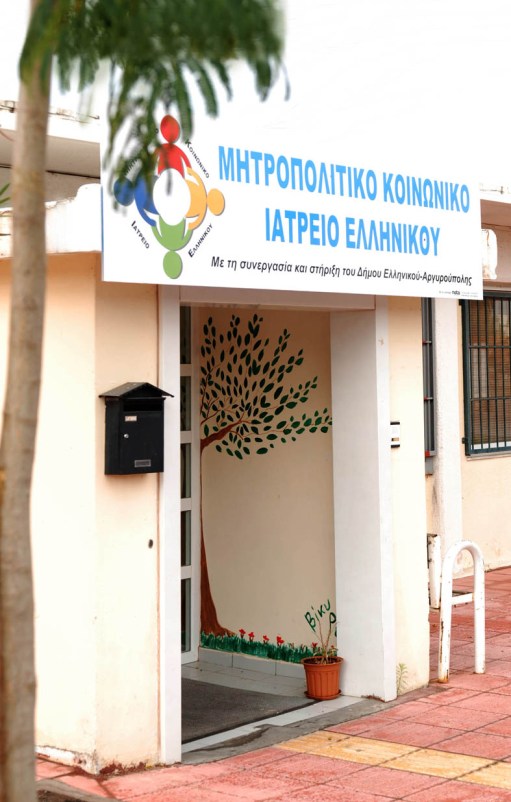 In this week’s article Haris Malamidis and Kostis Roussos write about building alternative networks in periods where ‘austerity politics remain untouched and tend to be normalised’. Malamidis and Roussos use as their case study the Metropolitan Community Clinic at Helliniko (MCCH), ‘one of the biggest solidarity health clinics in Athens’ and aim ‘to piece together the several elements that fueled and sustain the practices and logics of an alternative healthcare network from below’.

Although discussions on the Greek economic crisis seem to have lost popularity and replaced by the country’s ‘victorious’ return to the finance markets, austerity politics remain untouched and tend to be normalised. In this article we want to focus on one of the most affected sectors in the never-ending period of the Greek crisis; namely, healthcare. However, due to the recent events which were initiated to accelerate the eviction of the Metropolitan Community Clinic at Helliniko (MCCH), one of the biggest solidarity health clinics in Athens, our main intention here is to piece together the several elements that fueled and sustain the practices and logics of an alternative healthcare network from below.

In order to sketch a better understanding of those elements we deem important to give first a brief overview of the monstrous austerity effects in the Greek public health system. Since the beginning of the Greek crisis, the decrease of the public share in the total health expenditure was accompanied by an increase in patients’ contributions while at the same time the average wage of Greeks was falling sharply. The same also holds in pharmaceutical spending, drugs and medication. Doctors forced to work increased shifts since austerity policies prevented hospitals for hiring new personnel, while medical equipment and infrastructure worsened due to hospitals’ budget cuts. Some hospitals ceased operation and the remaining ones presented important deficiencies in drugs supplies. The more than 25% rise of unemployment and the governmental bills bounding access to public healthcare with the employment status resulted in the exclusion of almost 3 million Greeks from the health system.

Those ‘necessary’ reforms and cuts in one of the most sensitive sectors reveal both the intensity and strategic character of the draconian austerity plans that have been carried out in crisis-ridden Greece. To put it in a nutshell, at the core of the structural adjustment programs, imposed by the IMF, EU and ECB and implemented by every Greek government in office, one can easily identify a general wave of privatizations in the public sector on the one hand and the deregulation of the economy and market on the other. In this respect, the dismantlement of the health system vividly reflects the neoliberal idea that the state should conform to the rules of competition, functioning and being regulated almost as the private enterprises. At this point arises a very important strategic dimension of the neoliberal politics and it is none other than the affirmation of this deregulated socioeconomic situation as the one and only progressive reality.

But let us now unravel instead a story which in our understanding is intrinsically connected with the anti-austerity struggles in Greece and the making of an alternative political imaginary, one that is grounded upon collective action and solidarity. For it was the collective struggles and anti-austerity direct action that instilled the idea of an alternative organization of life in the everyday level. On May 2011 and over several weeks, a multitude of people met and appropriated Syntagma square and other squares across the country to express their discontent. The occupied squares of Aganaktismenoi, their working existence and their trans-local connections with the Spanish Indignados and Occupy movements in USA, UK and Germany, served as a laboratory for self-organization and self-managed practices. This process of politicization that began on the squares did not end with their cleansing on August 2011. The events developed in the occupied squares inspired and fueled several ongoing attempts to create new forms of self-organization and self-management of urban life. In other words, an incipient network of emancipatory experiments in the Greek space draws its inspiration from the practices explored in the squares and prefigures a new mode of everyday life articulated around equality and collective self-governance. Their repertoires of action address the most urgent issues emerging in the crisis-context taking the form of solidarity initiatives around housing and private debt issues, self-managed working projects, social and alternative economy cooperatives, barter clubs and collective kitchens, social centers for migrants, educational and cultural self-organized ventures. This collective action framework has led them to set up stable networks of collaboration, able to communicate their struggles and amplify their effectiveness across different areas where the various needs and activities of the people meet.

It was at this conjuncture that Greece experienced the rise of social solidarity clinics and pharmacies offering primary healthcare services and medications free of charge. Organized in the local municipal level, social clinics consist of healthcare professionals and citizens in solidarity. Decisions are taken on the basis of the members’ general assembly, while the clinics reject funding from political parties, NGOs and the state. Together with the provision of voluntary services to uninsured Greeks and migrants, social clinics raise claims for universal access to the health system and mobilize members and patients against austerity politics. 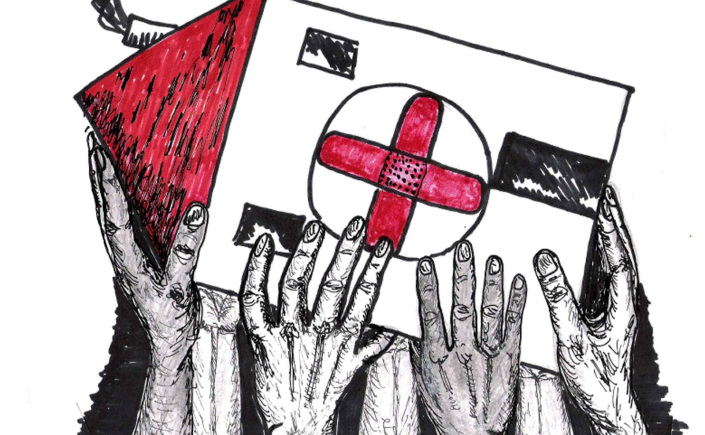 The Metropolitan Community Clinic at Helliniko, Athens, is among the largest social clinics in Greece.  MCCH occupies around 300 members with half of them being doctors and healthcare professionals. Established in the autumn of 2011, it has served, according to the clinic’s own data, almost 4,000 patients in 2012, 15,000 in 2013 and 16,000 in 2014. During the same period, MCCH used to support a number of public hospitals by donating drugs received by citizens and participated in international solidarity campaigns in support to Kombanie and elsewhere. Although access to the public healthcare for uninsured citizens restored in 2015, the MCCH clinic continues providing its services to refugees and migrants both in its premises and in squats.

The MCCH provides its services in offices granted by the local municipality. These are situated on the broader area of Athens’s former airport, subject to the privatization program of public property agreed with Greece’s creditors. On the 31 May 2018 Elliniko A.E., a company which manages the buildings and premises of the area that the clinic resides required the latter’s eviction until the end of last June in order to proceed with its privatization. In its most symbolic way, this eviction reveals the universal modus operandi of ‘accumulation by dispossession’. Given the ability of neoliberalism to frame the failure of the economic crisis on its own terms, the harsh privatization policies are not condemned for the suffrage they costed in the times of austerity but, in contrast, they are advertised as the only viable solutions. The clinics’ members declared their unwillingness to leave their patients and therefore to resist the forthcoming eviction. Central to this was the short time conditions for the relocation of their informal health center and the absence of an alternative space able to comply with the clinic’s practical needs. The instant expression of solidarity support by a number of patients, academics, journalists, collectives in Greece and abroad forced the government to publicly recognize the MCCH’s role and guarantee that not further attempt will take place until the clinic is able to transfer its services to another place.  Bellow follows the first official statement of MCCH social clinic prior to the agreement:

We say NO and “we will not go quietly into the night….”

On 31 May 2018 Elliniko A.E. (a quasi-governmental agency) sent us an eviction notice.  The Metropolitan Community Clinic Helliniko must vacate its premises by 30 June 2018, so that Elliniko A.E. can transfer the land to its ultimate buyer.

Our eviction notice was copied to Minister of Finance, Mr. Tsakolotos, the Minister of State, Mr. Flabouraris, the Secretary General Government Coordinator Mr. Papayannakos, as well as other leading government ministers and heads of private property development.

To date no alternative solution or proposal for re-location has been offered.  We’re supposed to pack up and go home on 30 June.  They have simply told us to close our doors and immediately stop this massive social action.

Since December of 2011 we have treated 7,366 patients and conducted 64,025 patient visits.  We pioneered recycling of medicine in this country and because of medicines we have gathered, hundreds of organizations and agencies throughout Greece have asked for and received support from us.  Besides our own patients, we have sent medicines and materials to community clinics, public hospitals social services and organizations serving people with disabilities, child care facilities, refugee centers, and many many more. The list is long, but all who came to us found open doors and immediate support from the volunteers at MCCH and those who support us.  There are thousands of those who have donated medicines, supplies or their labor both in Greece and from other nations.

Because of this, journalists from every corner of the planet have visited us, as well as university groups and groups wanting to establish something similar to our free clinic.  They all want to know how we do what we do.

MCCH has supported – and make no mistake – will continue to support those individuals who need us in the spirit of solidarity and respect for our fellow human beings.

At an urgently called General Assembly of volunteers yesterday, the volunteers resolved that we would not gently give up.  None of us would be able to look any of the patients in the eye if we simply accepted defeat.

We declare that we will not leave the premises and we will resist any measures taken to deny us access until a suitable alternative is found.  Our first duty has been and will always be to our patients.  We will not stand idly by and see the destruction of seven years of effort.  We have gathered medicines and medical supplies worth hundreds of thousands of Euro.  It is to be distributed to patients to insure their health, not left to be turned into rubbish.

On 14 June 2018 there will be a press conference on the operation of the clinic, and the need to continue

Haris Malamidis is a PhD candidate in Political Science and Sociology and member of the Center on Social Movement Studies at Scuola Normale Superiore, Italy. His research deals with social movements, contentious politics and solidarity economy. Kostis Roussos is a PhD student working on the commons and social movements at the University of Essex. He is a researcher at the Centre for Ideology and Discourse Analysis (cIDA) in the Department of Government.

Essex Transform: Rediscovering the Demos Inside the space of Academia

Catherine Rottenberg: How Neoliberalism Colonised Feminism – and what you can do about it