Home International To tackle Trump, we must do better than call him fascist 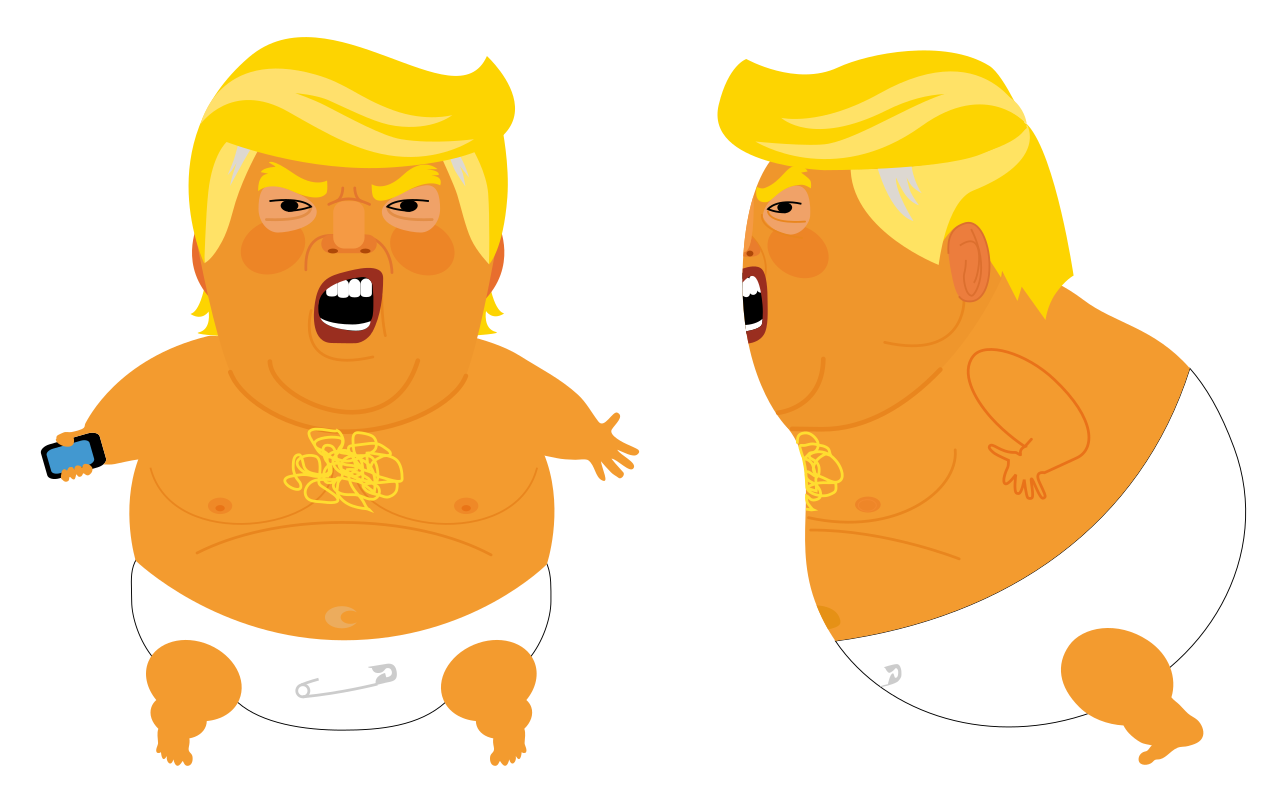 Tomorrow, Friday 12 July, the UK will welcome Trump with perhaps the largest protests since the Iraq war. All over Scotland —a country which loathed Trump before he even became a politician— and also in Wales, Northern Ireland and England, people will come together to express their indignation at Trump’s backward policies and most irritating of personas. Outrage will be high with the reasons for marching multiple: from Trump’s internment of child refugees to last year’s Muslim ban, from his devastating Climate Change skepticism to his jingoist behaviour in Syria, there is no scarcity of reasons to be angry – or worried. I share this outrage, and the fear. I have no intention to criticize the anti-Trump sentiment which I think is required from all progressive people, in this country and the world over. Tomorrow, I will march.

However, without criticizing our shared impulse,  I think we ought to be critical. During such times of turbulence, outrage can only go so far and we need to be hard-headed with ourselves. Trump’s machismo, jingoism, islamophobia, homophobia and all the other phobias he carries with him certainly need to be tackled, put down and fought back. Fighting Trump is indeed a necessity, but we must do more and go further. Beyond our imperious anger, we, who diversely call ourselves progressive, liberals, or socialists have to indulge in a new, more demanding, exercise: that is looking at Trump with cold blood and right in the eye.

What is Trump? Has this question really been raised? I do not pretend to answer it. ‘Trumpism’ shall wait a few decades for its first historical impact to be fully comprehended. What I can do nonetheless, and what we can all do, is to question ourselves about what we all seem to take so easily for granted: that Trump is a backward ‘fascist’ elected by millions of ‘ignorant red necks’, an ‘evil monster’ demanding the all-out expression of our hatred.

For, this has to be said, Trump is certainly a monster but he is not a fascist. Indeed, if we are to follow the famous line of Gramsci, he is the perfect example of those monstrous entities that emerge in the light and shade of history, when the past is dead and the future is yet to be born. Trump freezes us because he is an enormity, something that was not meant to happen and which is now here, overwhelmingly here, although we are still unable to define it properly. This is why many of us have succumbed to the alluring temptation of easy conceptualization. ‘Trump is a fascist’ they say.

This sounds like a comfortable intellectual shelter. Fascism —and therefore anti-fascism— are two convenient words: they are reassuring, they have a clear history that enable us to think we are not getting off track, that the world is not that illegible after all, and that, just like Spanish Republicans, just like French resistance fighters, just like the spitfires of the RAF, we are fighting a well-defined and monolithic enemy, much easier to combat than an undetermined and contradictory entity.

However, beyond the convenient rally slogan, let’s be serious: Trump is not a fascist. He is a manipulative leader backed by a few oligarchs, certainly, yet he has no organised party; he uses violent words, yet he has no militia; he is the head of State, yet he certainly doesn’t worship the State; he has abhorrent ideas, yet he has no coherent ideology; he is racist, yet America didn’t wait for Hitler to be racist; he is misogynistic and transphobic, yet the whole world didn’t wait for Mussolini to be so; he is protectionist, yet he is domestically neoliberal; he puts America first but which US president has not?

No, Trump is not a fascist. He is an American and a twenty-first century monster; and as every monster, he is polymorphous and hard to name – if not unnameable. It is, therefore, no use putting our 1930s glasses on our nose to stare at Trump, for he will appear blurry and even less charming than he already is. To determine the best means of opposition, we must first be able to explain Trump accurately.

What might be useful, then, is to follow Gramsci, and simply look at the past world that has died with Trump’s victory. Are we sure that the latter was much brighter? The reactionary world that Trump is about to build (hand in hand with May, Putin, Erdogan and other well-minded folks) is the gravedigger of another, out of date, reactionary world, inaugurated 35 years ago by Ronald Reagan (hand-in-hand with Thatcher and Deng Xiao Ping).

Although it is for the wrong reasons, Trump’s victory is putting an end to the all-out deregulation and the world wide free market of poor-quality goods and wretched people. Certainly, this does not mean that socialism will soon be rising in the USA. On the contrary, Trump’s protectionism, which goes back to the early twentieth century American economic model, is less concerned with the welfare of American people than with the protection of American capital. Nonetheless, reactionary as he is, Trump represents a break from the Washington consensus. This is will be our job to make the most of it in a progressive way.

Similarly, Trump’s erratic diplomacy, his ambiguous complicity with Putin, and his complicated exchanges with his European partners might undermine the future of NATO’s anachronistic and dangerous post-Cold War existence. From Syria, last April, to North Korea, last June, the United States has seemingly ceased to expect the endless assistance of the whole ‘Free World’ to indulge its headlong diplomacy. Surely, Trump’s impulsive and contradictory character is unpredictable and may not follow this ‘isolationist-unilateral’ line much longer. If he does, however, one might consider it a progress in disguise and a chance for European countries to champion world peace outside America’s warmongering influence.

Whatever happens next, Trump’s victory has emphasised the erratic yet unsurpassable nature of democracy. Invisible people whose lives have been devastated by globalization have reminded the world that their voice weighs the same as the polished opinion of some very liberal, very clever and very assertive New York Times experts.

The world Trump is about to build is gloomy; but are we really to regret the one he is burying? Standing against the worst aspects of Trumpism is mandatory. However, we should not blind ourselves and elevate him as some kind of devilish icon that would disable us to understand what he is and which historical moment we are living in.

Let us not be the useful idiots of the ruined and failed globalized world. Let us not forget that Trump won in Detroit, won in Michigan, won in Ohio, just like Brexit was embraced in Yorkshire and Scottish independence acclaimed in Dundee and Glasgow.

Everywhere in the Western World, the victims of never-ending neoliberal policies — unforgivably accompanied by an imbecile social-democracy — are awakening from their daydream. In return, many monsters are appearing. However, these monsters are not exclusively nightmarish. We, insulate radicals, are often tempted by the morbid delectation of listing the genuinely ugly monsters: UKIP in Britain, the National Front in France, the AfD in Germany, the League in Italy, Golden Dawn in Greece, and so on.

But in the contrasting light and shade of history, some monsters can actually turn to be beautiful and extremely promising. What about, for instance, Podemos in Spain, Mélenchon in France, and Sanders in the USA (who was the only one to understand that the old world was collapsing and, therefore, the only one able to defeat Trump)? They are new, robust, hybrid, unfamiliar-monstrous- political entities, yet our best hopes.

What about ourselves? Corbynites in England, Yessers in Scotland, Shinners in Ireland all constitute progressive, popular, anti-racist and radical monsters in the eyes of the oligarchy that sheds crocodile tears in the face of Trump.

Because we stand for all the poor people, whatever their colour or their gender might be, all the Trumps of the earth shall for ever be our enemies. But if we want to defeat them we have to embrace the world that makes them, because this world will also make us and is already regenerating the left throughout Europe. Let us cry with no Clinton, with no Blair, with no Juncker: they are the old world. The time has come to look the beast right in the eyes and to sharpen our own claws.

The British isles can – and must – be one of the first places of this victorious fight. Tomorrow and Saturday’s demonstrations will express the extent of our energy. If we are careful not to misinterpret the nature of our enemies, and if we stop sobbing together with the wrong allies, our islands shall rise and prove lethal to any suchlike Donald. 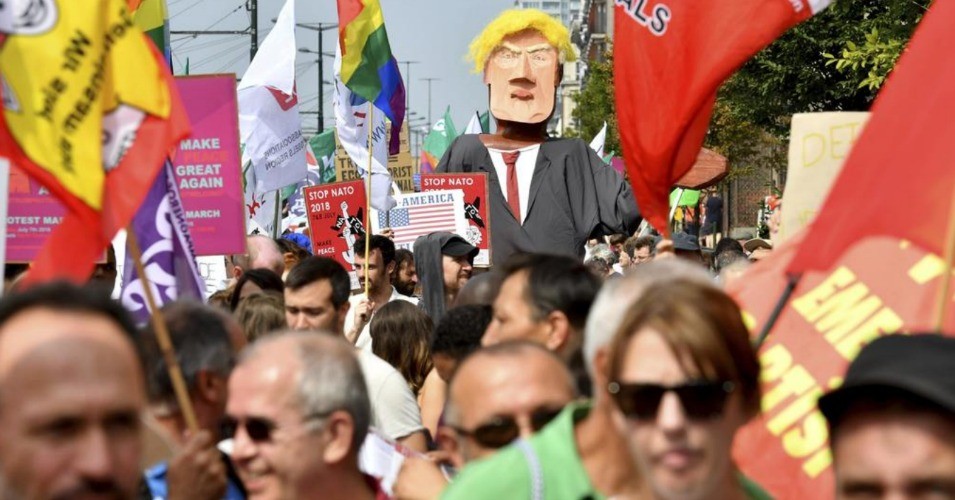 An older version of this article was published in Issue 105 of The Scottish Left Review.

The anti-populist effect of the progressive Left – a real concern for democracy |...

Turkey: the organic crisis of a post-populist moment | Omer Tekdemir